Genetic relatedness is a fairly simple concept. Animals, bacteria, single-celled eukaryotes all use DNA as the foundation of their being, and so will inevitably share a certain percentage of identical strands of DNA. The amount of DNA that two organisms share defines their relatedness.

One important distinction we should make however, is the difference between intra-species relatedness, and inter-species relatedness. Intra-species relatedness describes the way in which you are related to other members of your family – you have exactly the same genes, but the base pairs within those genes (and within long strands of non-coding DNA) can differ. For instance, you share 50% of DNA with your immediate siblings. What this means is that, while you have (almost) exactly the same genes, the specific sequences of base pairs within your genome will be 50% different. Inter-species relatedness on the other hand, describes how many genes we share with any given organism. Whilst the specific codes within those genes may be wildly different (as long as the resultant protein is still functional), as long as the gene serves the same function, they are considered the same. It is important, however, to be mindful of this difference. For example, one of the well-publicised facts about relatedness is that humans share 50% of their DNA with bananas. If the two types of relatedness were one and the same, this would mean that you are as related to a banana as you are to either of your parents. This demonstrates the difference rather well. 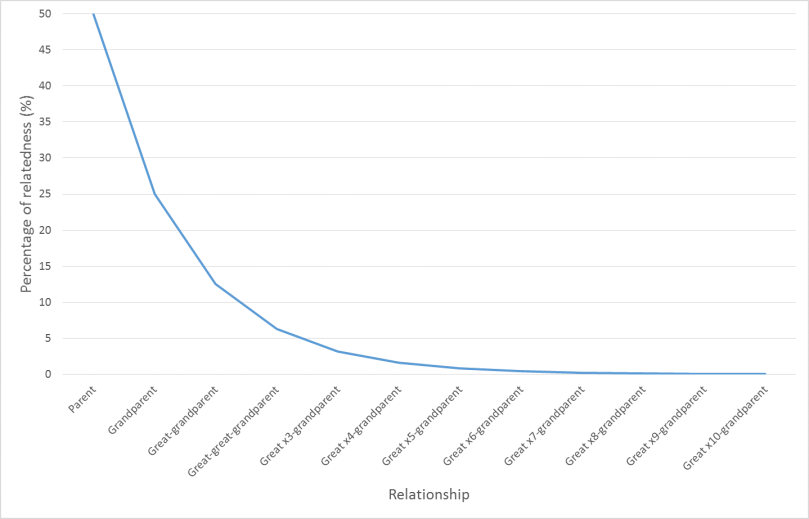 As you’ll notice, while the initial decrease in relatedness as the relation becomes farther and farther removed is steep, this decrease begins to decrease, and eventually asymptotes toward 0. However, because we’re dividing by two, we’ll never actually reach 0. Therefore, two individuals of the same lineage will always be related, no matter the level of removal.

(I believe it worth mentioning, that technically, this isn’t always entirely true. As an aside, and a little detour, I’ll explain why. If you’re not interested in the pernickety bits, then just skip the next two paragraphs.)

In reality, this would take a significant amount of removal. For example, take your great x20 grandparents. They share 0.000024% of their genetic makeup with you, but that still translates to 71,000 base pairs. It isn’t until around the 27th removal that the actual number of base pairings becomes negligible.

But what happens if the random stranger on the street doesn’t share the same lineage as us? Is this even possible? Let’s find out.

Genetic relatedness isn’t the only thing that changes the farther removed your family becomes. As you move from generation to generation, the number of each of those relatives you have also increases. You have 2 parents, but 4 grandparents, and 8 great-grandparents, 16 great-great-grandparents and so on. On a graph, this relationship looks like this:

Here, we see a very different graph to our graph of genetic relatedness. Instead of a decrease toward 0, we see an exponential increase after every removal, increasing toward infinity. Despite the difference, we see equally astounding results. Once we get to our great x30th grandparents, we supposedly have 8,589,934,592 of them! More than there currently are people in the world!

We must also consider that as we go back in time, and our relations become more and more removed, there were fewer and fewer people alive at that time. Taking this into account, we would have relations than there were people by our great x18th grandparents!

So what does this mean? Well, this is interesting and complex enough to warrant a full subject of study, and there are literally hundreds of anthropological factors, genetic factors, and environmental factors that explain this mathematical impossibility, but just two of those are important to us right now.

The first explanation for this impossibility, which is slightly less crucial to our point than the second, is that our ancestors must have “inbred”. Now I use this term lightly, because our colloquial definition of inbred doesn’t quite match up with what we mean here. In this context, inbred means that there must have been breeding between generations and between relations, regardless of the level of removal. For example, one of your great x10 grandparents may have had a child with your great x12 grandparent. Whilst this technically fulfils the definition of inbred, these two individuals could potentially only share a minute proportion of common DNA. Consequently, as we discussed before, this percentage of shared DNA could be so small as to be negligible, and so whilst it is technically “inbreeding”, it’s not quite inbreeding.

The second point this mathematical observation makes, is that, from a numerical point of view, we must all share common ancestry. In order for an individual to have a completely separate lineage, he or she cannot share any ancestors with you. But for each unrelated individual, we would have to times the number of each relations at each level of removal by two. For example, to have 2 unrelated individuals, we would need 4 parents, 8 grandparents, 16 great-grandparents, etc. But this incremental increase creates the same problem as before; pretty soon, you have more relations than people on Earth! And now, because we have two individuals, we reach that twice limit twice as quickly as before! As a result, the only way in which two or more individuals can only have the same number of ancestors as there are people, is to share some ancestors. So therefore, we all, at some point, must be related.

As before, there comes a point wherein the percentage of DNA you share with an individual becomes as small as to be negligible, but, nonetheless, the previous paragraphs highlight that we all share a common ancestry at some point. But what does this mean?

From a psychological perspective, this could be quite interesting. Whilst I will not attempt to go into the specifics, the truth that we all must be related to some degree or another begs a few questions. Do certain behaviours (altruism, kindness, etc.) change as a function of relatedness? If they do, is this genetic, or is this just because you’re more likely to be in contact with people you are related to, and you’re more likely to be kind to people you’re in contact with? Do we have an implicit appreciation of similarity, and are we more or less likely to look for individuals who are more closely related to us, regardless of whether we know the actual percentage of DNA we share?

In addition to these psychological questions, there are a few philosophical questions that spring to mind: What does it actually mean to be related from a humanist perspective? At what level of removal does your requirement to help a family member in need diminish? Do we not have the same responsibility for those further abroad as those closer to home, given that we are related?

To be honest, I don’t know. But I’ll think about it.

Recent Posts: Stats and Psychology in the World

An Ode to Statistics – Significance